The family-run company “Bogenschuetz & Sons” has produced solid textile machines in Hechingen, a small Swabian city in southern Germany, for generations. But nowadays demand is down since Asian competitors are cheaper. Michael Bogenschuetz (39, junior boss) is forced to negotiate on a sale with the Chinese behind his father’s back. But father Paul (90, senior partner) finds out and tries to get help from Michael’s sisters Marlies (45) and Marianne (49) to rescue his life’s work…

GLOBAL PLAYER tragicomically portraits a family, middle-class and entrepreneurial, in times of globalization.

The family-run business “Bogenschuetz & Sons” has produced solid textile machines in the Swabian city Hechingen for generations. But nowadays, demand is down and the employees have been on short-time work for months. The competition with the new global power China seems overwhelming. 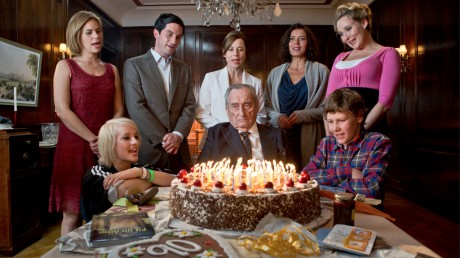 Michael Bogenschuetz (39), junior boss of the firm, has the water up the neck. The company loses money on every newly produced machine and the staff is getting increasingly worried. Michael tries to gain new orders, which is very difficult. The bank refuses new loans without receiving new securities. Michael already signed his house over to the bank without his family knowing. He lives off the salary of his wife, Silke Bogenschuetz (38) who works as a teacher. So, Michael is bound to enter into negotiations with Chinese investors in order to avert the impending insolvency behind the back of his father, Paul Bogenschuetz (90 and senior partner with the power of veto). To celebrate the ninetieth birthday of the patriarch, Michael’s sisters and co-shareholders come to pay a visit: the funky, “green” Marlies (45) with her 18 year-old daughter Salome from Cologne and the considerate Marianne (49) from Berlin. 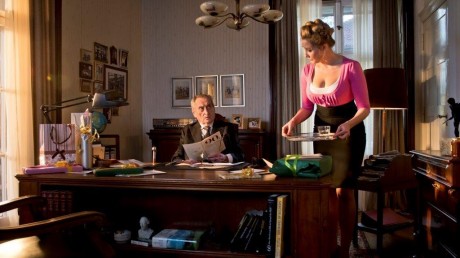 Paul is upset about his daughters not bringing their partners along. Except Michael, all children have lost touch with the rough-and-ready “old man“ who is living in the industrialist’s mansion by himself, backed up by his Polish housekeeper Agnieschka (30). The oldest brother Matthias (52), who lives in Thailand as dropout, did not come to visit at all. Later that evening, Michael lets his sisters in on the situation of the firm. Marlies and Marianne are shocked – they did not know the condition was that bad. 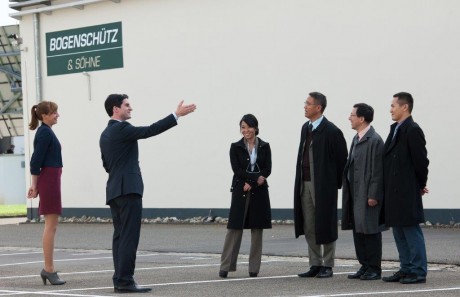 When the Chinese entrepreneur Chong Wang (35), together with his interpreter Lin Ling (27) and the Chinese team of negotiators arrive to take a look at the company’s factory, Paul Bogenschuetz assumes that Michael wants to sell the firm to the Chinese competitors. Father and son, the latter who is considering the Chinese as potential partners, get into a heated debate – the Chinese are baffled. The patriarch decides to disinherit his children. The family members are forced to sign over their houses – Paul wants to save the firm, his life’s work, by using that new capital. Paul doesn’t exclude himself by that and signs over his house to the bank, too.

Together with his housekeeper Agnieschka, he travels to Cologne and Berlin to visit his daughters. Michael thinks this is a bad idea but regardless, he cannot hold his father back from leaving. While Paul travels through Germany, Michael tries to obtain a life-saving order for the company – without success. On his travels, Paul learns new things about his children: His youngest daughter Marlies is not just the alternative single mother who he thought she was, but a modern entrepreneur and manager of several successful yoga centers. His oldest daughter Marianne, a translator of literature, never introduced her husband Andrew, 50, an American musician and Jew, to her father – for a good reason: Andrew never wanted to meet a German from Paul’s generation. Now it comes to the serious debate.
Paul’s initiative revives the family spirit. Marianne establishes an emotional connection to her father again. Marlies, who had not been taken serious for so long, contributes a good business idea at the right time and supports Michael in the negotiations with the Chinese. But the Chinese only have one goal: They want to buy “Bogenschuetz & Sons“. They are not interested in cooperation …

“Hannes Stoehr has made a funny and intelligent film about his South German homeland in the process of globalisation.”
Tip Berlin, Christina Moles Kaupp

“A film that takes the most creative skills of Hollywood to Swabia (area in South Germany) – the liaison between the lust to think and the lust to laugh.”
Stuttgarter Zeitung, Thomas Klingenmaier

“‘Global Player’ – iridescent between drama and silent comedy – is, in the best sense of the meaning, a homeland film, but without any folkloristic kitsch. (…) ‘Global Player’ parallels all questions of globalisation a story of a family with a rich tradition that has become alien to each other. The crisis pulls everybody closer together again.”
dpa

“A warm-hearted comedy with tragic elements. Cinema with heart and brain!”
Gong, F.Roemer

“The director and screenwriter Hannes Stoehr and the actors interwine graveness with drollness, ethnological curiosity with patriotism, the joy to entertain with the seriousness of a portrait about a crisis.”
Stuttgarter Zeitung, Thomas Klingenmaier

“Director Hannes Stoehr has managed to balance sincerety and humour. This is not just due to the good script but also to the wonderful actors – most of all Walter Schultheiss as senior boss. The story is about Europe versus Asia, young against old – or: Europe together with Asia and elders together with younger generations. How an imminent bankruptcy tears a family apart and binds them back together, as well as the clever solution unwinding the end is worth a trip to the movies.”
Blitz , Carola Kinzel

“Christoph Bach, Freiburg-born Inka Friedrich and Ulrike Folkerts as Bogenschuetz’s children are very convincing. You can only admire JinJin Harder for her genious pokerface while translating as well as her nearly accent-free German.”
Badische Zeitung, Heidi Ossenberg

“At 89 years of age, Walter Schultheiss is the star and real discovery of the film Global Player (…). – in the key scene he performs just brilliantly (…).”
Zeit Magazin, Jana Simon

“This is tragicomic as well as entertaining, as Hannes Stoehr along with Andreas Dresen is the only German director who currently creates everyday life stories while underlining them lovingly with humour. After his great audience success of ‘Berlin is in Germany’ and ‘Berlin Calling’ – which was in cinemas for over a year and has become a cult film -, Hannes Stoehr has made a province and family drama, a clever and entertaining comment on globalisation far away from the big metropolises.”
Deutschlandradio Kultur, Joerg Taszman

“Very close to reality and one of the very rare proves that economics can be exciting and entertaining.”
Manager Magazin, Wolfgang Hirn

“A story enriched with silent humour that keeps being interesting all the way (…). A substantially brillant and highly topical family film.”
Zitty, Martin Schwarz

“That everyone is talking about ‘Global Player’ (…) is due to three actors along many others: Stefan Hallmayer, Berthold Biesinger and Uwe Zellmer from the Melchinger Lindenhof Theatre.”
Suedwestpresse, Hardy Kromer

“Other countries celebrate military achievements on their national holidays whereas the founding myth of modern Germany is the economic miracle, and Walter Schultheiss as the family’s patriarch Paul Bogenschuetz (…) personifies this in an enchanting and touching way.”
Schwarzwaelder Bote, Klaus Stopper

“From the hip metropolitan scene to the rural countryside: After his celebrated Berlin trilogy (‘Berlin is in Germany’, ‘One day in Europe’, ‘Berlin Calling’), Hannes Stoehr returned to his home Baden-Wuerttemberg to make his highly topical film ‘Global Player’.”
dpa, Focus.de, Stern.de

“To sum it up: Sympathetic mixture of economic drama and patriotic homeland comedy with outstanding actors that screens exactly the right mix between tragic and merriment.”
www.spielfilm.de, Bjoern Schneider

“The comedy (…) uses the dialect as a catalyst for an authentic and thoughtful perspective of globalisation as a burden and as a chance.”
Abendzeitung Muenchen, Teresa Gross

“A lot of Swabian is spoken in the film and a lot of Maultaschen (South German delicacy) are served, yet the film is not a schmaltzy patriotic one. It is not a film by a Swabian for Swabians. The Swabian Alb is everywhere – in East Westphalia and Central Hesse, in Upper Bavaria and Lower Saxony. Wherever German middleclass meets global competition, this story will be repeated as shown or likewise.”
Manager Magazin, Wolfgang Hirn

“A complex film, a drama with lots of humour, understandable for non-Swabians, too. Christoph Bach convincingly performs as the torn junior boss and Walter Schultheiss (…) embodies his role of the senior boss with great grandeur.”
Die Welt, Hans-Georg Rodek

After his sensational debut “Berlin is in Germany” (Panorama Audience Award, Berlinale 2001), after “One day in Europe” (in Berlinale Competition 2005) and his cult film “Berlin Calling” (2008, e.g. ARTE Audience Award), Hannes Stoehr has yet succeeded in another outstanding film:

GLOBAL PLAYER tells a humorous family-story and deals with the generational conflict and the clash of two cultures in a dramatically changing world.

In Hannes Stoehr’s typical neorealistic approach, the film highlights vital aspects of present and past. The story is at the same time regional and global. 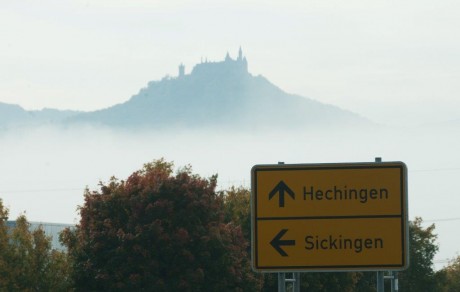 “Bogenschuetz & Sons” is a fictitious company, but the story of the film is based on real paradigms. And like Shakespeare’s ‘King Lear’ the patriarch Paul Bogenschuetz, 90 years of age and a WW II veteran, looks at his offspring wondering whether they are really prepared for the things to come.

At the end of his life he has to offer an important advice: Nobody wants war!